So i were to Australia for vacations during last 2 weeks. I was suposed to post stuff i got for donations this year [here is seo software worth buying post describing the situation]. I did buy a pack of local beers in Sydney and got picture but somehow my girl delated it from camera.. I could fake it with other picture of alcohol but that wouldnt be it. So instead of usual alcohol pictures i will give you 2 cool pictures from my travel. Lets say that the crocodile that i ate on the piture below was from the donation, it actually costed similar money to the beers.. But im susposed to post beers. I hope you guys are not sad or mad on me!

How does it taste? I say similar to chicken just a bit more ‘hard’ to crunch. But way better than kangaroo. And Emu [yes the ostrich] really sucks. So if you visit Australia go for Croc and Kangaroo but skip Emu definately. I dont know anybody that enjoed it.

Also i foudn a new movie to add to the list at one of most readable posts on the blog – How to really make money online called Arbitrage.Good motivational thinge with twists!
Now i also have other picture that is a bit odd to me. Propably to australians not. I did tag it even tho due to its nature i shouldnt.. But who knows it may go viral a bit.. Its official advertisment of ice-cream company.. 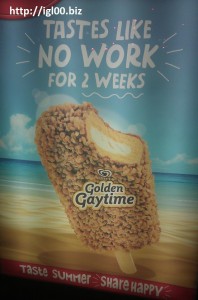